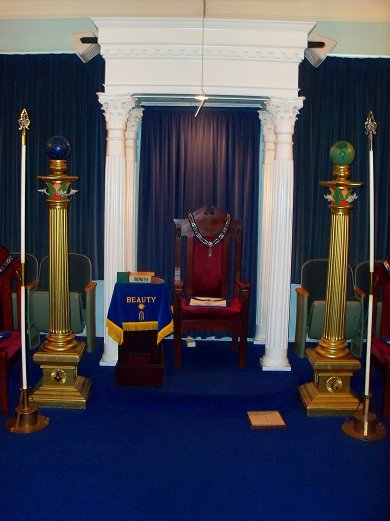 The History Of Glen Allen Lodge #131

With the blessing and support of the 8th Masonic District and the Ashland Lodge #168, a group of Masons from the Glen Allen area petitioned the Grand Master of Masons in Virginia, Philip K. Bauman, for a dispensation to form a masonic lodge in Glen Allen, Virginia. Said dispensation was granted March 21, 1914. The first meeting was held in the then, Glen Allen High School on Old Washington Highway on March 25, 1914. The first three officers, being appointed by the Grand Master of Virginia, were:

The remaining officers were as follows:

During the first year under dispensation, ten new members were raised to the sublime degree of Master Mason. The charter was granted on February 10, 1915.

Meeting continued to be held at Glen Allen High School until the Glen Allen Lodge built its Temple in 1922 at an approximate cost of $4,000.00. This was financed by each of the eighty-six members signing personal notes for $50.00. Glen Allen Lodge laid its own cornerstone in 1922, one quarter mile west of the Glen Allen railroad crossing on Mountain Road and has remained there through the present day.

In 1922 the Order of the Eastern Star was chartered and granted permission to meet in the Glen Allen Temple. They have continued to be an active organization.

Beginning with the early years of the development in Glen Allen, this Lodge took an active part in local affairs. Some of the activities include the laying of the cornerstone of Biltmore Baptist Church on November 30, 1929; providing a meeting place for the Glen Allen Baptist Church Sunday School in various years; sponsoring entertainment for the neighborhood; and a variety of other functions. Glen Allen Lodge #131 was removed from the 8th Masonic District and placed in District 15C. On March 3,1964 the original building was expanded
approximately twice its original square footage at a cost of $32,967.00. While under construction, meetings were held at our Sister Lodge, Ashland Lodge #168. On July 10, 1964 the first meeting was held in the newly enlarged, but as yet unfinished building.

In 1978 a picnic pavilion was built behind the Lodge. It continues to be used by the Masons for various community functions.

Glen Allen Lodge #131 has continued to grow from its inception to the present. The current membership, as of January 2017 was 238.